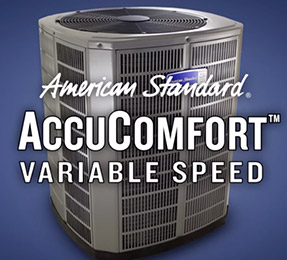 American Standard’s new Platinum ZV and Platinum XV variable speed air conditioning systems are taking home comfort to new levels.  An AccuComfort air conditioner can outperform both one and two stage systems by eliminating the peaks and valleys in the cooling cycle.

Single stage systems only have 2 options, either the air conditioning system is running or the system is turned off.  Think of it like driving your car with only two options, you floor it and drive until you reach the top speed of your car and then immediately turn the car completely off, then repeat until you reach your destination.  The main reason this method is inefficient is because your AC system spends much more energy turning on and reaching the temperature you set it to than it would to maintain the same temperature.

Two stage systems are more efficient than single stage but less efficient than variable speed AC systems.  A two stage system offers 3 different options of cooling, the AC is running at 100%, the AC running at 50% (or some percent less than 100), or the system is off.  Now in the car example scenario you would have three options – full speed, half of full speed, and turning the engine off.

Variable speed systems, like American Standard AccuLink systems, offer the highest efficiency.  As the name suggests, variable speed systems can adjust to many different speeds to keep your home at ideal comfort levels without using near as much energy as traditional single stage systems.  Because the air conditioning system makes adjustments in small increments rather than abruptly stopping and ramping up to one or two levels it uses much less energy to maintain the same temperature.  In our car example, this would be similar to driving on the highway at your vehicles most efficient, constant speed.

Another benefit of a variable speed air conditioner is a sharp decrease in indoor humidity levels.  The long run time and low speed help remove humidity from the air.  This translates to a more comfortable home for you and your family.

If you would like more information on variable speed systems and/or a free air conditioning replacement estimate, give us a call at 281-506-0136 or e-mail us AC questions.